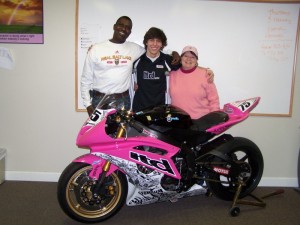 AMA Professional Daytona Sportbike racer Huntley Nash visited Eaton Academy on Friday, February 4th, as part of Eaton’s B.E.S.T. character education program.  The purpose of Huntley’s visit was to talk with students about the importance of setting personal goals and formulating specific plans to reach them.

Huntley spoke about his rise in the professional racing community and the personal and team commitments necessary to be successful on and off the track.  Winning three races and finishing in the top three in twelve races during the 2010 season represented a big step forward in Huntley’s career ambitions.  After his presentation, students were allowed ample opportunity to ask questions about goal setting and motorcycle racing.  Huntley also allowed time for autographs and opportunities for students to have their photograph taken sitting on one of his race bikes!

Huntley also spoke of the Susan G. Komen Foundation for Breast Cancer Research, one of his personal and professional causes.  Having lost his mother to the disease, working towards a cure has special meaning for Huntley.  In honor of his visit, students were provided the opportunity to wear a hat to school if they brought in a donation to the Foundation.  Students and teachers contributed to raise $245, and the donations were presented to Huntley at the conclusion of his talk.

Pictured above are teachers Joe Williams and Betty Baldrich posing with Huntley.  Below is student Benjamin Garber posing on one of Huntley’s Yamaha R6 racebikes. 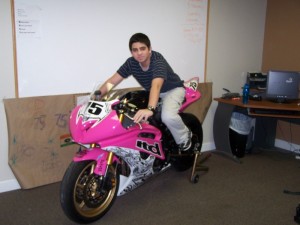