In Ms. Hrabosky’s English 10 A class, students have recently finished reading the novel Night by Elie Wiesel and presented their newspaper articles in class today.  Students were asked to create a front page of a daily newspaper in the United States  that would have been published during the 1930’s.  They were to include a lead story and a picture and highlight the events in Germany that led to WWII and the Holocaust.  In creating their newspaper article, they learned the difference between primary and secondary sources, conveying information from the two different perspectives, and the importance of taking a view point  on issues.  To further wrap up our unit on Night, we will be watching several documentaries of Oprah Winfrey and Elie Wiesel touring the various concentration camps and discussing what it was like for him during this time of his life.

Presentation of a newspaper article, which took a positive stance on the events that led up to the Holocaust and WWII. 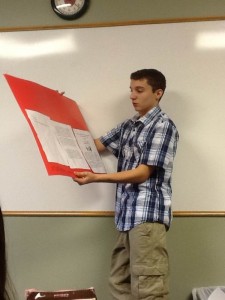 Newspaper article that explained why it is important to stop the war, the severity of the violence, and how the war and Holocaust is such a hateful crime. 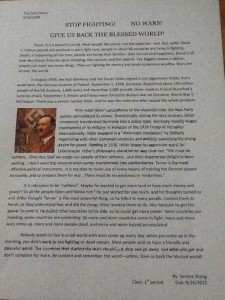 Newspaper article in regards to Hitler’s sending the Jews to prison, expressing their reactions to the way they were treated on a daily basis, and what it was like to live in fear. 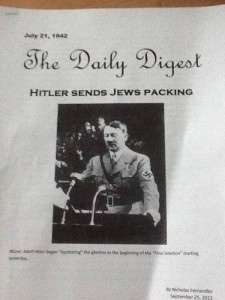 Presentation of his newspaper article on the time period of the Holocaust and the cause and effects that occurred during this awful time in our history. 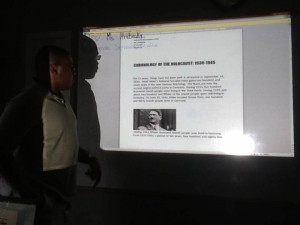